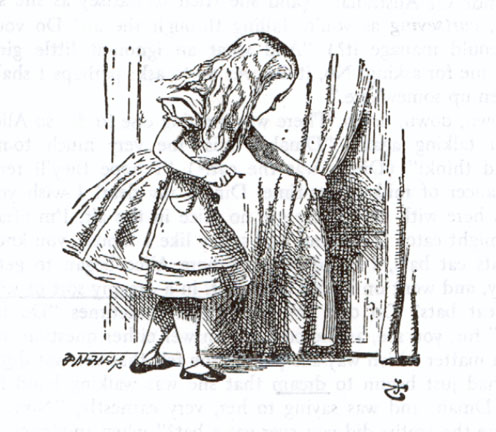 Tim Burton presents a version of “Alice in Wonderland” that is perhaps best understood as a shamanistic tale.

The “Wonderland" of Lewis Carroll is, most literally, "Underland" (the term used in Burton's film) —the lower part of the spirit world with it's irrational and maze-like qualities, which can be visited in dreams while sleeping and when in a trance state while awake.

All pre-industrial cultures tell stories of people visiting the spirit worlds: the lower spirit world by falling down a hole, or down a well, or going into a cave, etc. or the upper spirit world by climbing up a beanstalk, or flying on the back of a bird, or climbing a mountain, etc.

Shamans enter the spirit world while remaining conscious in order to correct an imbalance there that is causing problems in ordinary reality. They may be trying to retrieve a missing soul part (like “not hardly Alice” who returns to Underland having “lost so much of her muchiness”) and/or to do battle with evil forces (as Alice does battle with the evil Jabberwocky on the frabjous day).

"Civilized" writers also tell these kinds of tales or include these themes, although they usually don't know why they do—much like Lewis Carroll who denied any intentional symbolism but also said that meaning often exists beyond the intentions of the writer.

In this case, I suspect Tim Burton (or his screenwriter) has intentionally drawn out the shamanistic elements inherent in the original Alice books. And in any case, I really enjoyed this movie.

Love your take on Alice, Mr. Burton. And Helena Bonham Carter, who never disappoints, is a special treat as an indomitable, yet acutely vulnerable, Queen of Hearts—a deeply tragic figure who reveals for us all the terrifying consequences of fulfilling our most narcissistic desires and dreams of conquest.

Reply Joe
5:16 PM on October 29, 2010
I like the article you wrote, and I loved the movie. I saw it on the day it came out, which is exceedingly rare for me. I think Burton had a lot to do with the screenplay as did our "mad hatter." I love the word "bonkers," and think it is underutilized.

Reply devedrine
2:40 PM on December 1, 2010
Im hoping that as Alice sails to China, Johnny will show up on his pirate ship and they will live happily ever after!

Reply Kimberly
12:55 PM on December 2, 2010
I'm thinking Alice would be down with that ... and actually, I didn't mention in the post (it would have broken up the rhythm and coherency, I think) that I was a little concerned about the ending: Alice looks like she is setting off to become the next "CEO" of her famiy's colonial enterprises. Liberated? In some ways, but I think incomplete: Do women have to become like the men to accomplished this? And shall we "liberate" ourselves by exploiting others? I guess this is "progress" in the sense that it has come to be defined. But rather stale, compared to the forward-looking vision suggested by the rest of the film.

devedrine says...
Im hoping that as Alice sails to China, Johnny will show up on his pirate ship and they will live happily ever after!

Found a quality promotion service: posting your articles on WordPress sites.
You purchase on the texts and site of the article with links which quite right will transfer the weight from the donor to your site.
So it is easy possibly raise the low frequencies, and drag up the midrange and high frequency requests. Also likely growth of IKS.
Article promotion is absolutely safe and ideal for young sites as well as for the rest, and will give trust to your site.